Good Day!  i'm new here in the Mcafee community and i need help from you guys.  The origin of my problem is the SiteAdvisor, but before i go to that point, I installed the MVT to diagnose my Mcafee product, to identify what is the problem about my siteadvisor but instead it diagnosed a different problem and it says, "Virus Scan - Missing files (3)" and another one about update of the quick cleaner (i will save that for later, virus scan first).  well, I do not know how did that happen, I always make sure that my anti-virus is always updated, so, how did that happen that i have missing files?  and also i noticed that the scanning time became slower and slower.  i do not knwo if it is connected.  to the admin or moderator, somebody please help me.  Mcafee support team help.

The files are in the right place in the file system, so don't move them. The problem here is that the MVT programmers have put in a location for MVT to search, and I think they're using some kind of string concatenation to build up the file path (like, "c:\" + programfilespath + mcafee-section + virusscan-section"). They're also using relative locations ("..\.." means go up two levels). The result here is a location which doesn't exist on Windows 7.

So we wait for the programmers to fix a simple blunder, which shouldn't (I hope) take too long.

What McAfee product have you got installed?

I have Internet Security, and when I ran MVT yesterday I noticed that it was reporting several problems which I think are false positives. MVT also said QuickClean/Shredder should be upgraded, but I think the version of QuickClean I have (11.6.164) is the latest one. So for the moment I'm not panicking about the MVT warnings.

What is the SiteAdvisor problem? Having spent several hours experimenting with different ways to get SiteAdvisor to display correctly in all my browsers I have an inkling I may have seen whatever the problem is already.

likewise i installed Internet security, "Mcafee Internet Security 2012", it is 2012 because i know i bought the software last november of 2012.  yes, it also said the same thing to me, only my attention is locked on the virus scan missing files(3). it bothered me a lot and i immeditaely created this account to ask personally to Mcafee moderators what might be the problem.  i rely a lot on the virus scan, in everything i do, in every flash drives, even dvd's, i scan them before opening.  well, i dont want my device to be at risk.

so, you are saying that the MVT warnings are probably false positives, and although it says that something is missing it might be a false alarm?  i think all these issues arise when i updated my mcafee software last june5, 2013.  i do not know but i think that update made the ruckus.  i noticed that your version is different from mine, my quickclean and shredder version is 12.1 Build is 12.1.147. will this cause malfunction?

you said it is false positives, does that mean i don't have to worry about the MVT warnings and my virus scan works normally?

one more thing, the siteadvisor problem is it is always gray.  i believe that you already responded with my message at the firefox thread. and i already replied on it.  by the way, thanks for the quick response to both of my threads.

I do not say that MVT is definitely returning an incorrect assessment of the state of your McAfee installation. But it may, for some known areas, report an issue incorrectly.

MVT creates two reports when it runs. Save one or both to the desktop, open whichever shows the report about missing files, and take a screenshot. Post the screenshot, and if the files it mentions are critical then perhaps the best thing to do would be to uninstall, clear all the temp files and registry with MCPR, and re-install.

I have to be careful about this because your versions are all more recent than the ones I'm running, and also because different versions of MVT give different results. It's always best to download the latest MVT from the website rather than rely on a stored version auto-updating (as it's supposed to do).

is that so, i will attach the screen shot of the MVT warning. 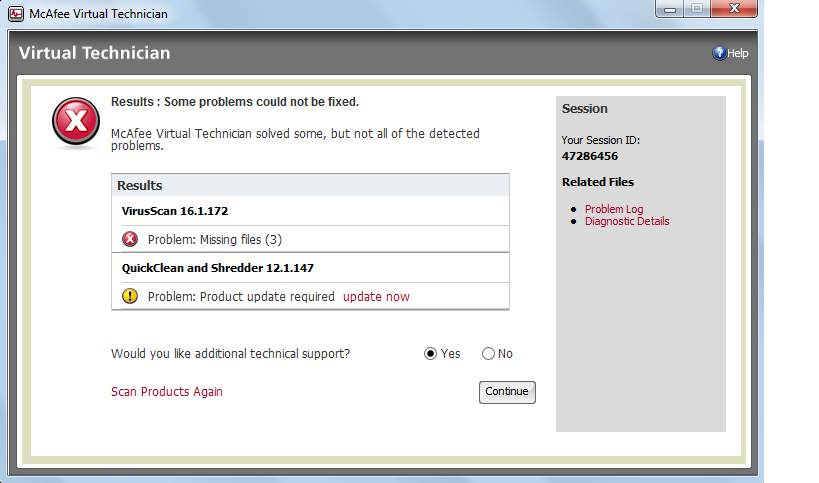 i also run the website MVT and the MVT i installed in my computer and it displays same results.

i understand and i appreciate all your efforts, sir.  Thank you, Mr. Hayton.  Please help me sir.

The message about QuickClean is the same one I see. I think you can ignore that.

The two logs you need to save to the desktop are these, and they will contain the names of the missing files. If the files are important ones, perhaps re-installing McAfee will be necessary. But only perhaps. I will ask if there is a known problem with MVT mis-reporting those files once I know what they are.

If it helps i currently have the same report from MVT about the missing files (VirusScan 16.1.172 'Missing Files (3)' report) -  i posted about this a week or so ago.  I had a remote session with support who did three things:

Tec said all ok, just ignore the 3 missing files MVT is reporting.  i am running the latest McAfee (AffID =0) on Windows 7 32bit.  I still get occassional 'spikes' in cpu activity (ie makes pc unresponsive for 2-3 mins) and am trying to troubleshoot what is causing this, probably some other program that makes McAfee spring into life but i haven't worked out what yet.  It soes this even when no programs are opened, and i have turned off shedules scanning.

i clicked the probelm log and it opens a dialog box, there are details about the version of the MVT but i skip that and find the missing files, and this is it: 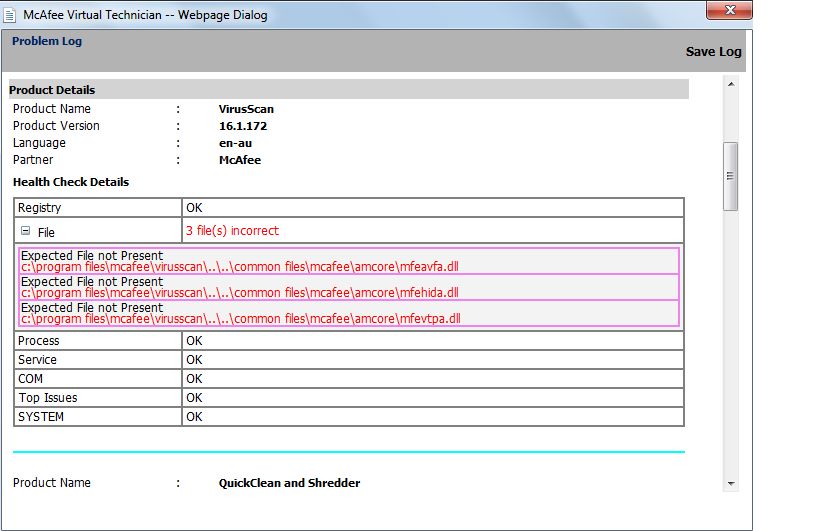 well, i don't know how important the indicated missing file.  are those important files?

I will ask about this, although I might not get an answer until Monday.

One thing occurs to me : MVT has given warnings before simply because it looks for the files in the wrong location.  I look at that path and I see "\..\..\" which may just be a way of shortening the displayed result, but may also be an unintended error in the pathname.

Right-click on that location and select Search

Enter one of the file names and make a note of the location where it is found. Let me know what the full pathname is and we'll see how it compares to what MVT expects it to be.

I encountered the same Virtual Technician problem reports yesterday.  I had some problems with my McAfee Total Protection 2013 application on a Dell Windows XP SP3 machine, 32-bit and uninstalled and reinstalled TP2013 the day before.  Yesterday, I encountered a problem with an automatic update hang that I previously commented on in the Community blog, that was found to be related to the enabling of Intrustion Protection and had been solved by the McAfee engineers but appears to have resurfaced in the current builds.  So I installed and van VT to try and get to the bottom of that issue and got the exact same 4-item problem list at cyanz.  I have disabled Intrusion Protection-Basic and Automatic Updating to focus first on the four problems identified by Virtual Technician.  The three files are missing from ...\common files\mcafee\amcore\ and are the three dll files that are show in the cyanz log.  I looked at that subdirectory and those files are not there.  I also did a search of my MVT log and saw each of those files are installed in at least one other program file subdirectory associated with McAfee.  I gave some thought to copying the files into the common files\mcafee\amcore location, but chickened out.  I also have the QuickClean and Shredder message that it is out of date.  I have Updated but still get the out of date message.

Help would be appreciated.