Once yet again, the Development team continues to release garbage code that is untested.

If it is thoroughly tested, on a Win 7 Pro (64-Bit) and works, the problem that I have reported to the GREAT Tech Support Staff with the BROKEN UPDATE "FEATURE" is far worse than I thought.

Please refer to my comments on the Thread "Security Report details" @ https://community.mcafee.com/t5/Total-Protection/Security-Report-details/td-p/613316

This is just another in a string of worthless, un-populated "Reports" with yet another untested "Monthly Report".

This showed up on my PC today "WITH NO INFORMATION - JUST LIKE ALL 6 "SECURITY "REPORTS".

This is a screen print of this garbage "Report": 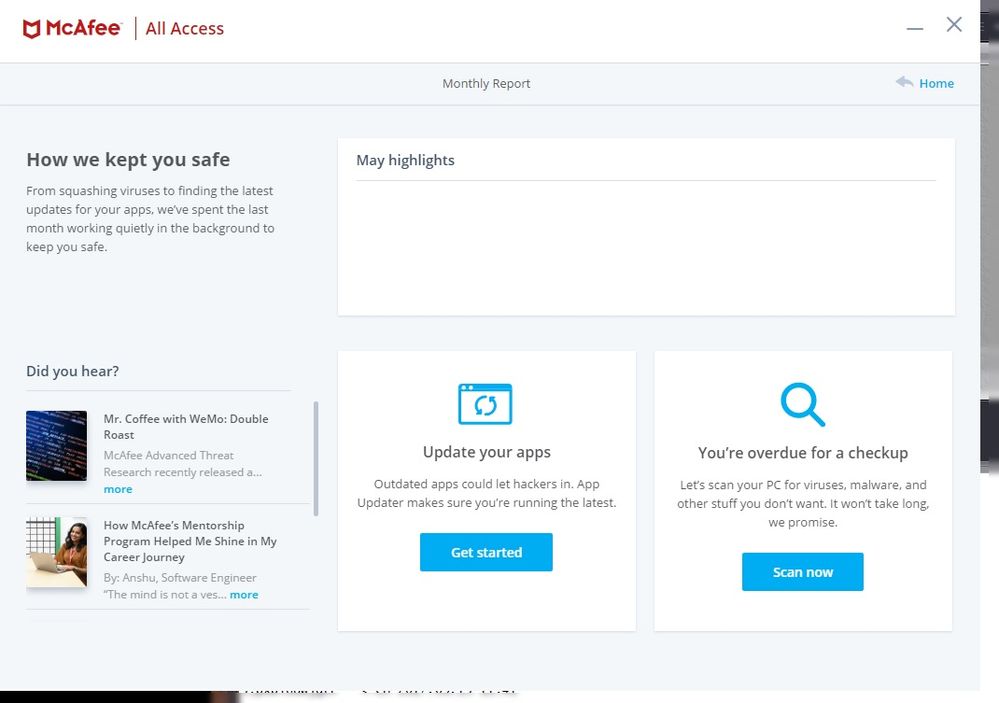 Really, you have protected me from nothing for a very long time apparently.

Back to the PRIMARY PROBLEM - THERE IS NO ADEQUATE TESTING OF EVEN THE "NO-BRAINER" "REPORTS",

IF DEVELOPMENT REFUSES TO TAKE USERS SERIOUSLY WHEN THEY REPORT PROBLEMS (multiple issues have just been ignored by Mr. Romine) the entire functionality of McAfee Products is really called into question - how can "Development" handle programming for virus scanning  when they can't release 7 accurate, populated  "Reports".  The 1st 6 covered in my prior comments regarding "Security Report details" (link above) are also in "LiveSafe", WHERE THEY ALL WORK - WHY CAN'T THE CODE FOR THOSE "LiveSafe" "Reports" simply be copied over to "AA-TP”.

In addition, why didn't the "Monthly Report" receive any / adequate TESTING.?

IF the "DEVELOPMENT GROUP" refuses to test software, they probably need to be restructured or replaced.

This is the first I'd seen of this issue.  So I'll take a look.  I think you'll find that we're responsive to issues when they're brought to our attention.  No need to go off the emotional rails.

I felt forced to post this response from T Romine (above), because it was sent to me, appearing to have been posted here - it had not.  While I do have the appropriate email address, this overall issue, of untested products being forced on McAfee customers needs to be addressed publicly.

Yes Mr. Romine, you likely had not heard of the problem with the "Monthly Report."   As I stated just before the screen print of THIS non-functional report "This showed up on my PC today "WITH NO INFORMATION - JUST LIKE ALL 6 "SECURITY "REPORTS"".

However, you have been notified multiple times regarding "Re: Security Report details", at https://community.mcafee.com/t5/Total-Protection/Security-Report-details/td-p/613316. is just the latest.

First, to answer your rather obnoxious questions, (when we have been fighting over the underlying problem for several years - lack of testing):

As many times as I have discussed it with McAfee's EXCELLENT Tech Support Staff, without ANY response or "FIXES" to known and escalated issues is very frustrating.

Your comment "I think you'll find that we're responsive to issues when they're brought to our attention. No need to go off the emotional rails" is truly obnoxious. - I have tried multiple times to communicate directly with you via email, over the last several years.  You are simply impossible to deal with for a customer who probably knows more about this product than you do.  I have used it for well over a decade (in addition to being a mainframe programmer and analyst since 1982), yet when you are contacted, you insist that there is nothing wrong with the product.

There are many other bugs/lies contained in the AATP product that you have continued to perpetuate.

As I have discussed this with other Management and multiple Tech Support - my rather extensive programming experience, with its very thorough quality control.  It is very obvious, from my experience, that your group does not even perform remedial testing on many changes that you dump on us - how hard is it to miss the 6 unpopulated "Security Reports" as are described in the linked comment.

An additional note about the "Monthly Report".

The user is allowed to see it ONCE.  There is no "Menu" item anywhere in AATP to execute it a subsequent  time - It appears to only execute once, right after the 1st of the month.