My problem is with the computer(s) that is (were) running McAfee from Cox.  In the "good old days" uninstalling the software, deactivated that copy.  That is no longer the case.  There is no place on the "Subscription" page of the Cox McAfee Security Center to deactivate a copy of the McAfee Security Suite from Cox.

In the last couple of months, I have had to reformat and reinstall the Windows (Vista) operating system several times on the computer running McAfee from Cox.  The primary reason for these "reformats & installs" is to achieve a "clean install" of the OS.  (There have been both hardware and software problems.)

It's my understanding that I'm allowed up to 5 copies of McAfee from Cox.  According to the Cox/McAfee site, counting the now defunct computer and the current "re-installs" of the OS and of McAfee from Cox, I have 4 copies active.

Somehow, I'd like to have the Cox/McAfee Suite permit a deactivation on a particular computer to avoid the problem I'm now faced with – too many copies running.  In addition, I'd like the Cox/McAfee site to properly reflect the number of licensed copies of McAfee I am using:  1 prepaid and 1 Cox/McAfee.

I have called the Cox/McAfee tech support folks and the only answer I get is, "Don't worry about it."   Any help in solving this problem will be appreciated.  There will be more reformats and reinstalls in my future.  Thanks.

I can't answer for the number of licenses allowed on your account, only the Customer Service department can do that, not Technical Support.  It's a free phone call away and available linked under 'Useful Links' at the top of this page.

I do know that a normal uninstallation of the software will decrement the account automatically, but sometimes that isn't possible and yes, you are right, there is no way of doing it on the account page now, so once again you'll have to call them to sort it out, sorry.

Thanks for your comments.  I was hoping that the folks at McAfee Customer support would respond beyond the "Don't worry about it" answer.  I suspect that's asking too much.

They rarely visit these forums.

I am not much sure about the cox and partners like are handlingthe subscription option by themself. Usually all McAfee customers can directlydeactivate computer from their account directly. Even though we can try it bygoing to McAfee page from cox account. Check for the PC drawer and try todeactivate if there is any button available. 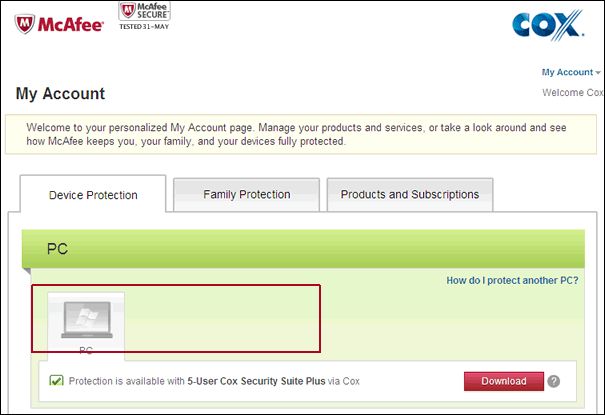 I found an article on Cox website.. It's about Family Protection. You can try this as well.

Thanks for your comments.  Kind of too bad they don't have some folks spending time on these forums.  Seems to me it's a good place to learn where the problems are and what customers are seeing.  But then customer service is not always regarded as highly as it should for service providers.

Sorry for the inconvenience caused , could you please provide us the recent ticket no that was received from tech support so that we may track back and get in touch with you.

I appreciate the information and the links.  I am already acquainted with the Cox information you've cited.  Regrettably, there is still no way to "deactivate" an active license for a specific computer with Cox/McAfee, like there is with the purchased McAfee accounts.

IMHO, the ability to properly  "manage" a Cox/McAfee account must include the ability to deactivate a Security Suite from a specific computer.  I'm not asking for more licenses than I'm entitled too, but without the "deactivation" ability, neither am I getting what I should.

Again, thanks for the references.