what a pain - mcafee and windows remote

OMG it sucks, it so sucks …….. but it’s free and came from my provider so I’m stuck with it!

I have a PC that PC runs Windows 7 and it does  it quite well.

On that PC it has a feature called Remote Desktop Assistance.  It’s set under properties of the PC and it set like:  The radio button is checked and the level is the less secure one where all versions are allowed. (yes it works fine)   I did however change the default TCP port.

However if I turn on the bloody McAfee Firewall it blocks it very well … but I don’t want it too!!!

So …. open the console, go to PC Security and then open Firewall, then go down to: Internet Connection for Programs.

In there, scroll thru all 678 bits of crap in their from McAfee itself ( guess how impressed we are with that ?) and eventually find a link called:  Windows Remote Assistance   and then hit edit.

( and because we can’t make the fuggen window bigger )   we have to scroll down to the settings:  Edit Program

Then go down more and its says:

So there are the screen caps and what I see, so where have a screwed up folks?

Probably a mod will help more but have you set the changed port in ports and system services in the firewall options for the remote assistance ?

Where do I find that option ?  If you mean the "open to all devices" option and that button that lets you select if you have that net guard thing on then that's all I know ........

Ok not on PC at this time but option is two choices below the connection option you are talking about above.

It's virtually impossible to do it this way ...... I put up (like in my original post) two screen caps of what I see when I open the firewall.

Maybe if you get a chance sometime, have a glance at them and maybe it will help, when you see what I see, but anyway I appreciate the help tonight anyway !!

I meant this area 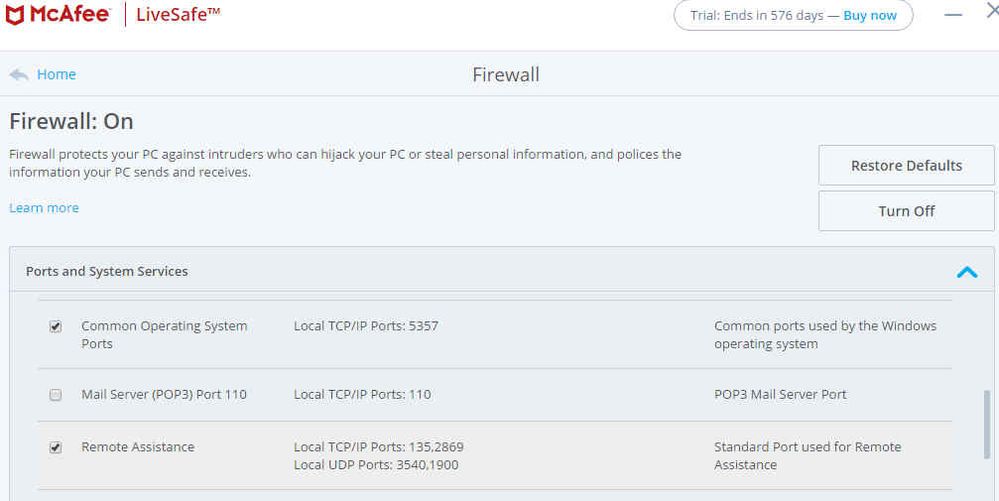 I never use this feature so unfamiliar with the ins and outs. If I cannot find more on it I will flag a mod to popin if he has not already

What product have you got my livesafe is at version R24

This describes what I was saying

I assume if you disabled the firewall it works? Does it work with the original Port number that you changed?

I don't have that product and then I don't have a section called: "Ports and System Services" that's why I can't find it.

McAfee security center is the name of the Interface. What is shown at the top left of the interface it should say Mcafee and a product name.

Your version is R18 which is 6 versions behind though a mod might answer if your product has different version but I doubt it.

I assume you updated the program?

Mcafee Security center ( note this is a component of whatever product you have not the product.)

Affid no says who you bought the program from or what McAfee partner installed it.. What is your affid no?

In virusscan component what is the last update date?

>>>..All that said the firewall section should have a ports area It has had for the past 10 years. 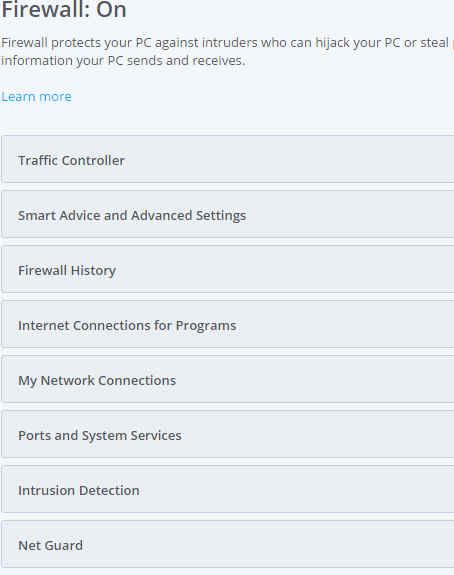 So you haven't this option in the firewall area?

If not I wonder if Your provider has that option removed. Some partners ask for minor options or changes I think but a mod will answer that better so best to pass this up the line

Can one of you read through this issue and comment please

So I ran the updates and it said it finished but nothing changed, the version is the same.

I should note that this version I have is free -  I get it from my provider and it has their logo on the front of the app (see the pic) so maybe some stuff is turned off?