TSP came prenstalled on my friends laptop( non-techy, and had never manually run a virus scan), and lic. is current (confirmed by MC TS).

When I'd click on the MC desktop icon, only a blank box would appear/ no idea how long !?

I then tried uninstalling TSP in Add/Remove, and the same white box appeared- Kept saying it was removing, and Never completed (after 30min?)?

I finally closed Add/Remove, and reboot-  TSP was still installed,   I then uninstalled the other remaining MC product/reboot.

I then tried running MCPR as admin/reboot- Went back to win firewall, and no MC in startup.

I ran MCPR several more times, and MC... was always there( I have not yet run Any reg cleaners).

I then tried running MCPR in Safe Mode, but failed as files were in use by another...? No MC products are showing in Add Remove/Startup/Services...

What Next?- I've run out of ideas other than Maybe running CCleaner...?

I'm not familiar with TSP - what's the full name and is it provided by Dell?

OOPS!- Sorry it should have been TIS (Total Internet Security).

It must be something renamed by Dell then as we only have VirusScan Plus, Total Protection, Internet Security or All Access.

It's quite possible that the uninstaller is wrecked because of malware.  See the last link in my signature below for some suggestions.

If the latest version of MCPR doesn't work - and I stress you must always use the latest version, from HERE, and sometimes it needs to be run more than once, rebooting each time, then you would have to remove the software the long and involved registry way.

Go to Start/Run and enter regedit  and click OK.  In Windows 8 it's easiest just to click the Windows key + R simultaneously.

A  page  should open with the top left hand corner looking something like this: 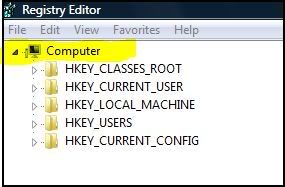 if for some   reason it's expanded, collapse it and then highlight My Computer   (Computer in Vista/Windows 7/8).

Go to File tab and click "Export" and send all of the   registry to your desktop. This is in case something goes wrong. It can   then be rebuilt by simply right-clicking that desktop item and selecting Merge.

Whatever is found, right-click and  delete.

Hit  your F3 key for the next instance and keep going until all entries are gone.   It can take a long time if a lot of McAfee components were oroginally installed and the MCPR removal tool (Useful Links at top of this page) didn't work for some reason.

If one says it can't be deleted this is where it gets complicated. You have to then find which key on the left column pertains to it and   right-click/Properties/Permissions and give yourself permission.