This doesn't seem to be a serious problem but I thought I'd ask about it in case anyone else has experinced the same thing.

Since yesterday, the following message has appeared twice, once on start up and again after installing a couple of Windows Update patches: 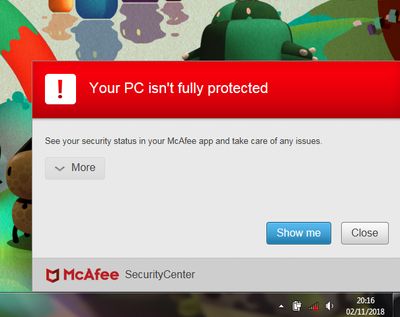 The weird thing is that when I open the McAfee UI the banner is green and everything seems to be working normally. MVT didn't find any problems either. When this message appears the McAfee icon in the system tray turns grey, but I found running a check for updates (while offline) refreshes it to its normal state. Is this a glitch of some sort? I'm running Windows 7 Premium 64 bit and my McAfee details are listed below:

Please update McAfee to the latest version 16.0 R16 and see how it goes. I understand that the subscription was part of Dell purchase; if you run into issues updating please re-install McAfee

Please update McAfee to the latest version 16.0 R16 and see how it goes. I understand that the subscription was part of Dell purchase; if you run into issues updating please re-install McAfee

Thanks for the response. My SecurityCenter automatically updated to version 16.0 R16 just over a week ago. So far the error message hasn't returned.