Thank you for your invaluable input. I will bring this up as a Topic of discussion on our weekly Conference call Monday. Until then I would leave it uninstalled, as you can manually check for your updates/add-ons  as a temporary work-around.

I apologize for the inconvenience.

Actually these are the only 2 instances I am aware of. Could you both please kindly provide the Version/Build of McAfee you are subscribed to? This will help immensely in determining what may be the culprit.

I was the one whom reported this back in December of last year. We will inquire if there has been any reports also, to the *Front-Line* Technicians (Call Desk) on call. I will get back to you momentarily after our call.

I'm not sure how it started, but I faced the issue a week ago when my subscription ended at my home PC.
I got exactly the same symptoms as described before.

After a restart I right clicked the McAfee icon to open it,  waited for about 15 minutes and it opened - but each click on the LiveSafe software did nothing or took long times to react.

In one case I right clicked & selected Change Settings > Firewall, after a long time the firewall settings opened, and I was able to disable the firewall for 15m which restored my internet connection.
With internet I set a new subscription, but it did not help. I could not make the McAffe control to work smoothly. Also it got stuck on verifying my subscription.
Also the uninstall of LiveSafe got stuck, so I uninstalled using the MCPR tool.
After that I re-installed everything, and it worked well till today - I'm starting to believe LiveSafe is Jewish like me, so it doesn't want to work on Saturdays :)

Today I have again the same issue, no internet connection, chrome is getting stuck forever, the LiveSafe control will not open, the firewall settings are not opening for an hour.

I'm going to uninstall it once again.

BTW I work for Intel in Jerusalem, so if someone in McAfee likes to call me, I'm there during Israel working hours.

I clicked 10 times on "Dismiss" but nothing happened, after half an hour maybe, the whole window closed. 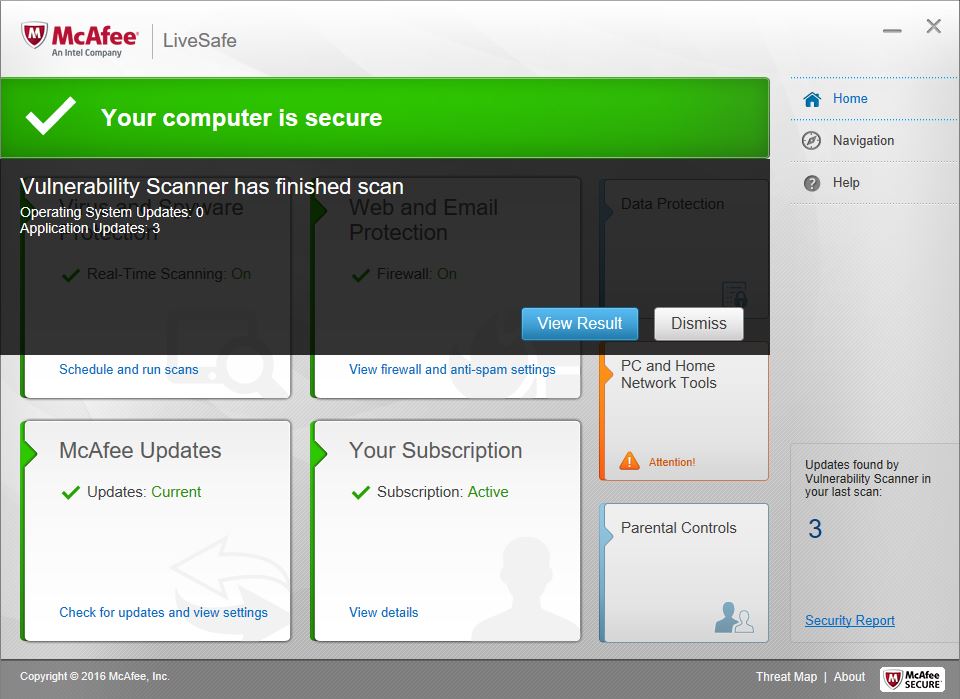 Thanks for any help,

More info:
- A scan I did on a shortcut on my desktop, is stuck running over & over again, every 10-20 minutes.
- Trying to run MVT, it's opening for very long minutes, showing a white window with a title "McAfee Virtual Technician".

At the end I got a "Navigation to the webpage was cancelled" message, OK, It works only with internet :-S

- Running MCPR, stuck... Some "Windows Smart Screen" stated I have no internet and asked if to run the program, MCPR is running after answering "Yes".

=> Chrome is up and running but I have no AntiVirus...

=> Succeeded & all is working well

I'll track this post for a solution, see you later.

It looks like McAfee LiveSafe did a major update of all it's components around February 7 or 8. Since then, several times, I have had my Internet access go dead, but can still ping local devices and access my router and modem. Other devices on the network are fine and have full Internet access. I have to reboot to get it back, although I guess if I let it sit long enough it may work again. I didn't check McAfee at the time's it happened, so don't know if it's the cause yet. Seems the most likely, though.

This copy of LiveSafe came with a free year on my Dell computer. If this happens again, and I can verify it's McAfee, I'm dumping it and just using the stock Windows Defender...

My McAfee has the following versions and build numbers:

Below is an image of what I would get when Mcafee did open for me.  I am not sure if this was due to me clicking on the icon, since it would have been 10-20 minutes after I clicked on the icon, or if it opened on its own in response to the problem. I know at least once I did not click on icon after a restart and it still opened like this.  I could not interact with the Mcafee interface behind the message about the script.  And after interacting with the script message the McAfee interface was frozen and would not respond, not even close. 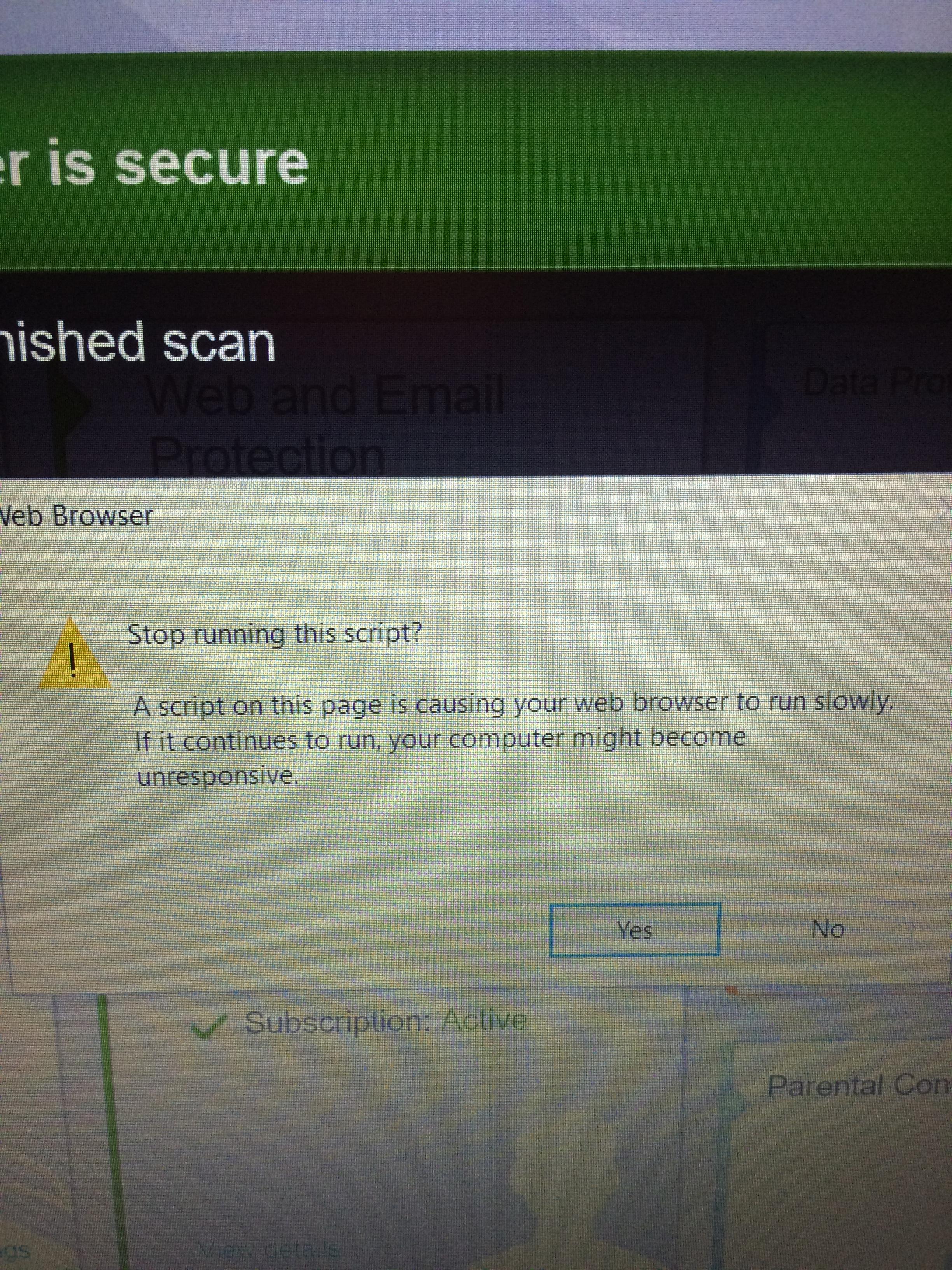 So this problem continued Friday and Saturday morning.  On Saturday morning when I turned the computer on it had the same issue, nothing internet related would work.  McAfee would not open, or opened very slow.  When It did finally open I would get the screen shown above and it would not respond.  Microsoft Edge would not load webpages, office products like Excel would not open, windows update would not download an update, and HP support assistant would not connect to check for updates.  After getting the above screen on Saturday morning, I clicked no and tried to interact with the Mcafee interface.  I was unable to.  I then tried to shut down.  THe computer hung on shutdown, the screen went black but the power light stayed lit.  I ended up having to hold the power button down to shut it off.  After shutting the computer off, I powered it back up.  When it powered back up everything seemed to be working.  Mcafee opened normally, Microsoft Edge loaded webpages, office products like excel and word opened, windows update would check for updates, and HP support assistant did connect to check for updates.  I ran a quick scan and a full scan with Mcafee which did not find any problems, I also ran a update check with Mcafee, I think there was an update that installed, and I ran the vulnerability scanner manually and it found two shockwave updates which I did not install.  The only thing that was not working was that windows update found a NVIDIA update that was failing to install.  It would download but did not install properly.

Saturday night, turned the computer off and powered it back on Sunday.  Things worked ok again on Sunday.  I will monitor the situation today again and see if it works ok when I am home from work.  Not sure if the problem has cleared itself somehow.  Could the problem have been related to a scan trying to auto run, as opposed to me clicking the button to run it?

I just had it happen again. I was unable to open McAfee while the Internet was down. I rebooted the computer to get it working again. I am going to uninstall McAfee.

This has been happening to me, as well.  A reboot does the trick, but it is occurring way too often.  I have been trying to read in these posts some workaround (aside from just uninstalling), but it is not clear.  Mine was not free, I paid for a year subscription.  Sure hope it gets fixed for good soon!

Not sure if you saw my reply yesterday or not, but I found my version and build numbers.  Did you also need to know engine version or content version numbers, or last update dates?

I also attached a message of the error that I get when MacAfee does open about the script.

The problem was occurring Friday and Saturday, but after I had to force shut it off things worked again.  The only issue I saw after the force shut off was a problem with a windows update, which installed ok yesterday.

If this is a MacAfee problem, could it be caused by something auto running as opposed to me telling it to run?  After things were working, I told it to run both a full and quick scan, check for updates and run the vulnerability scanner and everything seemed to work ok.

I apologize for my delayed response, as I have been a bit *under the weather* the last several days. Please know that I brought up this issue for a *Topic of discussion*. ​ our Resident/Internal Tier 2.5 Technician/Engineer has assured us he will take a look at it.

As soon as I hear something further, I will update you. Thank you all for your understanding and patience.

No problem.  Thanks for letting  me know. I just didn't know if you saw my post because I replied to myself and not your message.

I will let you know if it happens again and if I notice anything else when it happens.