I've had this problem in the past. The Update doesn't start until I open McAfee LS. I see a 'gray' dot on the icon in the Systray. System is not as responsive either, just a noticeable lag opening some icons. I open LS and it is on getting updates, 0%. Then it starts 'looking' and installing.

In the past this was fixed by reinstalling LS.

The first thing I did was run VT, no problems found. I then deleted and re-installed LS. This morning, problem is back.

Yes I get that too and so do a lot of people.  It's a bug they're working on and hope to fix asap.

Interesting. I didn't see it reported here at all? Did I miss it or was it not in the LS area?

I'll probably have to wait longer too. Dell's version always seems to appear later than the McAfee standard one, sigh...

I wish they'd also fix the link from e-mail and have me signed it. I continually need to sign-in to post and then have a problem that it doesn't think I am? Have to manually for to the main page again in another tab, sign-in, select message and can then reply. PAIN...

Most of the updating issues were posted in SecurityCenter or in General Discussion sections.

Regarding Jive SBS the community host - it is very temperamental and will show you logged in when your aren't.

I've got into the habit of redisplaying the page every time I open this site and sure enough, I'm not logged in despite my setting it to remember.

Another update case. Can you please work with ispalten and collect the logs?

Well since my last delete and re-install it appears to have stopped?

Still, tell me what I need to do though so I can do it when it happens again? 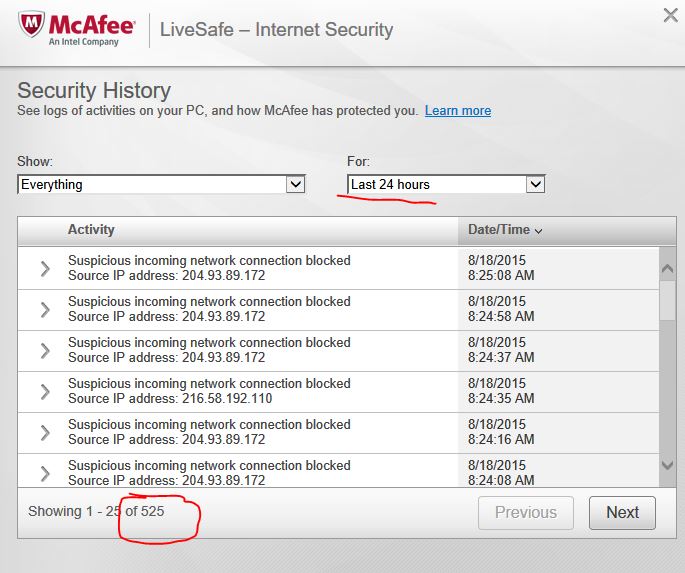 The two above are JIVE SOFTWARE and GOOGLE... Many others too... 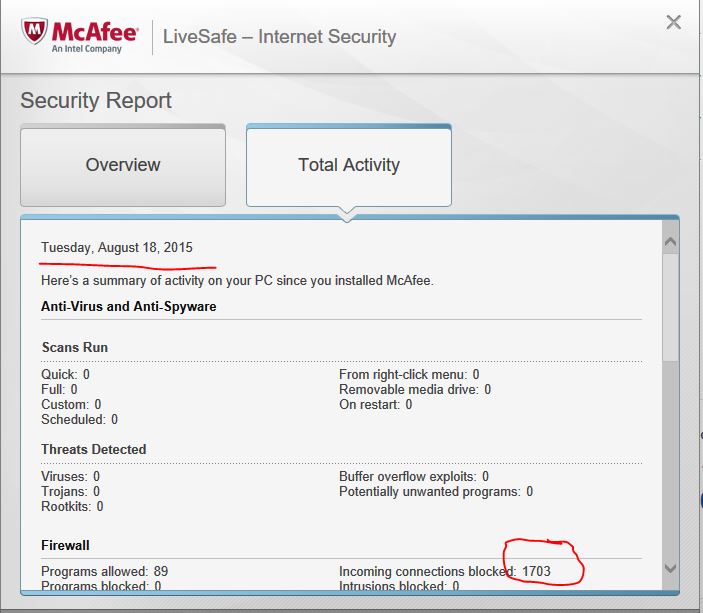 We all have those, that is simply the firewall bragging that it's working.  Take no notice of those.

Regarding it appearing when you say the machine was off...are you sure it was off and not hibernating?

In Windows 8 and upwards, the default setting is for Fast Boot enabled, meaning it never totally shuts down, unless you power off.

How does one know they are not losing 'something'?

It was OFF for almost 12 hours and that is why I thought the number was high. Basically it was when I turned on this morning that these occurred.

Why didn't the two reports show the same info? Security History showing 525 item with a mix of a short period the night before and this morning and the Security Report showing almost 2,000 blocked incoming connections. Should the two be the same with the Security History having a higher could due to some time for events from last night? I just doesn't add up to me? What is the definition of "suspicious activity"?

Check W10 Fast Startup, if it's enabled then your machine never switches off unless you pull the plug..... Windows 10 Forums

Regarding those, I have no idea and I doubt support would have an answer either.  Probably a glitch in the design.

Over the years I've learned to totally disregard those sections unless a support person specifically tells me to look there.

I do have Fast Startup on, I've toyed with it on and off. Really don't need it as I have an SSD for the boot drive. However, basically the PC is asleep, that is everything has been written to HIBERFIL.SYS as the system shuts down. Power on reloads that into memory and passes control to 'come alive'. Nothing is running during this time. When it 'sleeps', other than some h/w that is defined to wake the system from sleep on, based on interrupts. My network card is set NOT to wake up the system. Only my mouse or keyboard can wake it up from sleep, not the power off situation.

Main difference between Fast Start and a real power off is when the system restarts with a real power off everything is reloaded new. That is you might not get some updates done until you do a real power off so they can be loaded. I think MS puts flags into the registry to force such a shutdown even with Fast Startup enabled.

I have an icon on my desktop that I use to shutdown (and a similar one for restart) and it uses the command "C:\Windows\System32\shutdown.exe -s -t 00" which I think also bypasses Fast Start? If I were doing the Fast Start I think the "/hybrid" parameter is needed?

I still get 'nervous' when I see a lot of stuff like the 'suspicious activity'. How do I know if they are real or not? My router doesn't complain about them in its log?

Speaking of logs, are there any I can look at that logs all that stuff? If only a few is there a way to allow those IP Addresses unconditionally?