Does anyone know what's new/changed/fixed in SecurityCenter 14.0.6120? 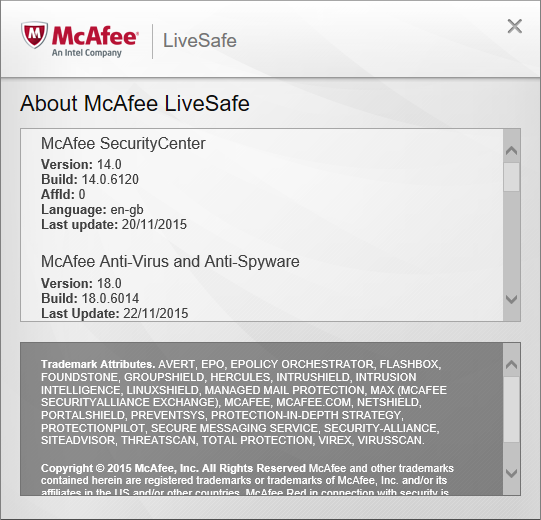 I did notice that the installer looked a bit different when I installed LiveSafe on a clean install of Windows 10 I did the other day. The McAfee name along the top was in a thinner, more modern looking font. It looked quite nice, but unfortunately this change doesn't seem to have extended to the actual program once installed.

I don't know what's in that update, and I don't yet have it here in Canada.

It's rare that they tell us what's in an update unless some major issue is being patched.

I would imagine it's  the usual "Bug Fixes".

The McAfee name will eventually disappear to be replaced with the Intel one, but that will take time.

Moved to LiveSafe for clarity and possible further input.

Bug fixes are always good (unless they break something else), but it would be nice if McAfee provided release notes for each build. Perhaps in the future.

On a side note, I find it strange that they are still cosmetically tweaking the current products (even if it's just the installer) as I am half expecting a big refresh some time in 2016. It has been about 5 or 6 years since McAfee adopted the gray design scheme it has now, although I suppose the arrangement of the interface changed in 2013 when everything was made bigger so it was more touch friendly. A big bit of speculation on my part but I think in the next year or so Intel will probably streamline their consumer security software line and there'll be just one product, probably called 'LiveSafe from Intel Security'. This would be similar to what Norton have done and would make sense as all McAfee products come with a cross-device license now anyway, so the feature gap has somewhat decreased between packages. Also, could the design of the Cloud AV beta be a sign of things to come in future retail product(s)?

The new 2016 beta should be coming soon so we shall see if there are any differences though I doubt it other than maybe adding raptor/real protect to the AV component.

Yes that should give us a good idea.  Peacekeeper and myself have it installed on one of our OS's.

It seems I did hear mention of that eventually becoming a reality/adding it to the Consumer Line.

I might add that I created a 'Product Idea' on this subject.

In regards to the incorporation of the 'Cloud AV' product (Raptor) renamed 'Real Protect' , it was a topic of discussion during our Conference call today in reference to being introduced to the Consumer/Retail Version.

This is a confirmation/discussion from a Senior Level McAfee Product Manager from McAfee Labs :