Starting around a week ago (end of September 2010), When McAfee Security Center prompts me to do check for updates, after clicking on update, McAfee responds with the generic "unable to get updates, if this persists, get technical support".

I've had McAfee for about 5 years, and every few months an error like this occurs.  I've learned that the online chat, regardless of the issue, ends with McAfee saying I need to reinstall (never explain why, or what the issue was, just reinstall).   For the past week, I've logged into my account and tried to start the download.   I'm getting an HTTP error and cannot access the site.   Additionally, I get the same problem with Virtual Technician (unable to connect with the McAfee website).

I wasted 3 hours yesterday with multiple online chat "support".  As usual, I was directed to reinstall, but as I mentioned above, I can't get to the website.

To sum up, Security Center can't get updates, and I can't access the website to reinstall.  From the looks of things, I'm not alone, but I'm not sure how similar/different my case is from others.  Does anyone have any suggestions?

To McAfee:  This is my last straw with your product.  The tech support is beyond bad.   My subscription is about to end, and if I don't get a quick fix, I won't be renewing.

Sorry for the inconvenience caused, could you please clarify the following:

1.    What type of your internet connection you are using? (DSL, Cable, Wireless etc…)

2.    Did you recently notice any kind of annoying popup (or) Malware activities on the computer?

3.    What is the version of your Internet Explorer? Did you recently upgrade your internet explorer?

4.    Click on Start> Click on Run> Type CMD> Type ping download.mcafee.com and check whether you are able to get proper reply

Thanks for the quick reply.  My answers are below:

1.    What type of your internet connection you are using? (DSL, Cable, Wireless etc…)

2.    Did you recently notice any kind of annoying popup (or) Malware activities on the computer?

3.    What is the version of your Internet Explorer? Did you recently upgrade your internet explorer?

4.    Click on Start> Click on Run> Type CMD> Type ping download.mcafee.com and check whether you are able to get proper reply

Approximate round trip times in milli-seconds:

Oops... that's creepy, looks like the host got corrupted due to some kind of malware/ rootkit infection on the computer. Please try the following:

1. Click on Start> Click on Run> Type Drivers> Open Etc folder> Look for host file> Open that by using notepad> Check whether there are any IP entries under 127.0.0.1 - If found clear them (please find the sample screenshot of the default host file) 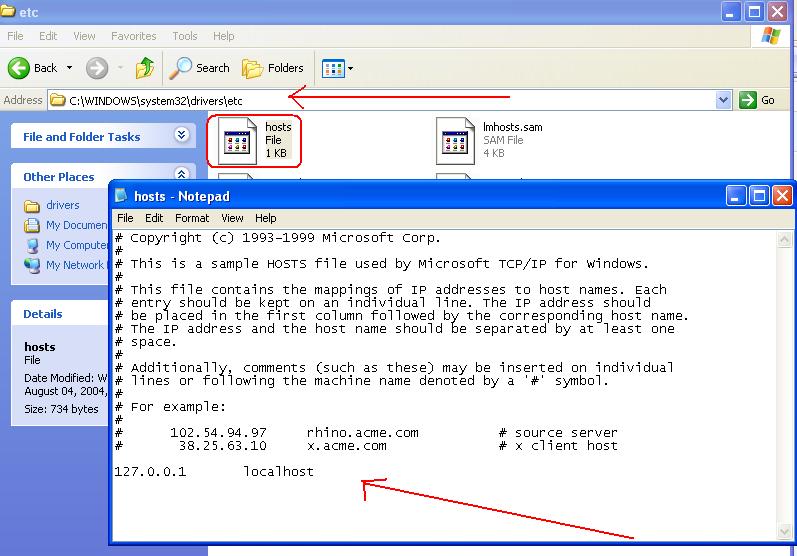 2. Save and close the host file

3. Click on Start> Click on Run> Type cmd> Type IPCONFIG /FLUSHDNS> Click Ok> Then try to ping with download.mcafee.com and let me know the reply address

@Aldrin:  There was nothing funny in the host file.   This was one of the many things McAfee repeatedly checked.

For those interested (Hopefully McAfee is listening), the issue has been resolved.   It took 7 McAfee technical support chats, 2 Tier2 telephone calls, and 9 hours of my sitting in front of the computer.

McAfee kept trying to take Remote Access of my computer and every time they went to the host file.  Nothing was wrong there, so they deleted all history/temporary files/cookies and disabled a few other things under the Tools Advanced tab.  After this, several things were tried.

1. The first incompentant tech supporter told me I didn't have enough RAM and ended my chat.

2. The second tech, who didn't listen to the details of my issue, told me to uninstall McAfee Security Center and reinstall, despite my comment that I couldn't access download.mcafee.com.  Doing this required a reboot, so the chat was ended.   This resulted in my computer now having NO security upon reboot, and still not able to access the reinstall via the McAfee website.

Eventually, my first Tier2 telephone conversation revealed that the issue was an IE8 issue.  So, I hesitantly uninstalled/reinstalled IE8.   After this, I became able to access the McAfee website and the reinstall.  However, the reinstall ended immediately, saying it was unable to continue.

Finally, during my second Tier2 telephone conversation, I allowed Remote Access and after a lot of searching, the helpful technician realized that OLD McAfee versions were blocking the current McAfee Security Center from reinstalling and getting updates.  He went through my computer and removed everything McAfee related.  This took about 2 hours.   After this, I was able to reinstall Security Center and the issue is resolved.

The short answer to this problem....old McAfee was sabotaging current McAfee.  No infections, no viruses, just McAfee screwing itself up.  From the other current threads, it sounds like I'm not the only one with the issue.  Again, I'm amazed at the atrocious tech support from McAfee.  The internet chat sessions always include the tech asking the same generic, irrelevant questions, without listening to the issue, before ultimately saying, "we fixed it, please reinstall".   It's very, very poor support.