Essentially all access to the internet is blocked but network troublshooter sees no problem.  Application event log is awash with:

If the event originated on another computer, the display information had to be saved with the event.

The following information was included with the event:

Usually happens after Firefox or Thunderbird or Office Word / Excel / Access (which initially invoke MS OneDrive), Legacy Family Tree 8.0 etc. etc. are invoked, either singly or concurrently. Ram usage remains low (typically 10 - 15%) but the network is utilizing 70% capacity even when the machine is idle and all apps are closed.  TCP connections off the chart, Listening Ports, off the chart (literally hundreds of instances, most duplicates favoring svchost.exe).

THIS IS AGGRAVATING ENOUGH TO MAKE ME WANT TO UNINSTALL MCAFEE AND REQUEST A REFUND!!!

15.1 as far as I hear so far is set for next month. I think they need to get the new installer to work properly. Yes if you have a valid subscription you will be upgraded of course partners will sometimes be delayed and that out of McAfee's hands.

Given I was one of the earlier ones on the thread and seem to have hit almost every problem before everyone else (lucky me) (locking browser, high memory, high CPU, inability to bring up mcafee console, inability to uninstall)....and have posts on all of the above, let me give you my personal experience on the ONLY things that worked for me.

I had "total protection" on 2 different machines and this happened on both.

When I got the browser lockup, would manually kill ClientAnalytics and that would get me going again.   However finally had to disable it.   The problem then came when McAfee would push updates to me and something would always restart it, if not forever but temporarily.  These couldn't be killed.  Not sure if it was an incompatibility with something they pushed in mid January (I originally installed like Jan 1 or 2) but something restarted ClientAnalytics  and what did it would not allow me to kill it from taskmanager.  And it survived a  a reboot (could be the install was still going and kept restating it constantly recreating the situation)..   My recollection of the new service I saw during this timeframe might have been the McAfee Application Installer Cleanup (0254641486718744).service. I finally just uninstalled (painful, took forever, and never would actually complete).    Uninstall would look like it wouldn't start but 10-15 minutes later it would be at a screen to uninstall.   Had to turn off sleep settings to keep my machine from hibernating because uninstall did not complete before it would go into sleep mode.    When I finally gave up all hope on it uninstalling, I hard rebooted.    Used the cleanup tool and that got rid of most of it and allowed me to have a workable machine..

I downloaded a CLEAN copy from Mcafee website (did not use original installed version which was still in my download folder).   I again disabled Client Analytics and was okay for a while UNTIL the day I actually got the "fix" for ClientAnalytics.   Again, everything locked up and could not manually kill ClientAnalytics.   Did a reboot (did not shut down cleanly).   On reboot, I saw the high CPU usage, everything blocked internet wise.   Eventually got into firewall settings and disabled.   Made my machine usable and the update seems to have "eventually" completed as got one of those "tour new features".   Checked version and sure enough this happened when I got the "fix".  Started seeing the high CPU on it (no longer the memory issue) and finally just gave up on Client Analytics and have again disabled it   Told them I wasn't a good judge on the memory thing since I again gave up on using it.

Since then have gotten several updated (as again evidenced by these tour new feature messages such as one I just got again on both machines) unless they just like to periodically annoy us with it for no apparent reason.

So far without ClientAnalytics enabled and with the "fix", my machines have been stable.  Which is why I asked what the purpose of it is.  The eventual response was to monitor the health of mcafee services.   I know they used  to have this EPO agent (maybe still do) for enterprise which was supposed to prevent users from changing things and it would change things back, but can't figure what kinds of problems they are seeing with users doing something...  With a name like analytics, I would personally guess they are trying to collect stats on how efficiently they are scanning or what they are scanning...

My recollection on the first time I got the problem was the appearance of McAfee Application Installer Cleanup (0254641486718744).service.    I really don't remember this thing with such a weird name when I first installed McAfee.   I even commented that it being installed under a USER account (see post #130) begs the question of someone not knowing what they are doing.    It's also what the cleanup tool wouldn't cleanup.    I just checked now and at least on this machine, it is now installed under windows temp.   Why is a McAfee SERVICE now installed under a TEMP directory?   Temp directories are TEMP for a reason.   Many cleanup tools regularly delete things in the temp folder.

What may I now ask is this thing even used for???? 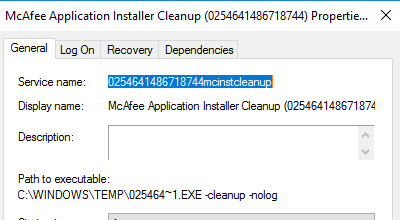 Will ask again Monday call re temp folder query though I assume it was put there temporarly as the file has a temp symbol in the file name. That wave symbol.

I had the issue of Chrome crashing last week. I spent a few days speaking to countless people from McAfee live chat, and later found out all that needed to be done was to disable AnalyticsSDK and restore my McAfee Internet security (although I think just disabling the  AnalyticsSDK was the main fix). Then I had an issue with TrueKey log in, spoke to countless people in regards to that issue, and it was finally fixed last week also (after lots of frustration and time-wasting).  Now today all of a sudden Chrome stopped working and I see in TaskManager that AnalyticsSDK has been enabled again for some reason. So,we repeat last week: Spent last 2 hours trying to get it fixed with McAfee support live chat. Apparently this time AnalyticsSDK does not need to be disabled, they just restored my McAfee Internet security. But here is a screenshot of my TaskManager with AnalyticsSDK and CPU usage Imgur: The most awesome images on the Internet

Good morning, I have the same problem, that all users who post in this thread, a high memory consumption by AnalyticsSDK.

My operative system is:

Then paste the English translation made with google, apologize if it is not very good..

This is my original post so i thought i would chime in with an update on my situation.

After the original presentation of this memory leak was resolved with the update pushed by McAfee about out two weeks ago both of my other PCs have been hit with the CPU problem.

On my PC2, i uninstalled McAfee and reverted to windows defender. The shift to defender with full removal of McAfee immediately and fully resolved the elevated CPU symptoms.  I intend to to wait until McAfee fully addresses all issues with the offending process before i go back to McAfee.

My PC2 just caught the CPU bug in past 24 hours. I am in process of trying to disable the service and continue running the rest of the McAfee installation.

I am going to shift further feedback on the CPU symptoms to a new post. First I am going to watch my PC3 after a reboot with the process disabled.

Do you know where we can submit a complaint to McAfee? It seems as if many of us have had the same issue for over a month now or maybe a little less?

Apart from the usual temporary fix of disabling AnalyticsSDK, there has not been much help or no word from McAfee officials to tell us why this has happend, or even a fix from themselves. All I have heard is that they 'are working on a fix with a new update'. Well when is the new update? Why is it taking so long?Why was AnalyticsSDK being enabled again, as mentioned by myself and a few others.

Official McAfee are pretty useless with customer service, not this forum, as I know the people who help here are volunteers and I have the upmost respect for their help on here. They have done more than McAfee officials!

Since I switched to McAfee's PC security 3-4 years ago, every year I have come across countless problems with their softwares, and its getting to the point where I am getting sick and tired, I am even thinking of switching to another security provider, or just finding a free, but popular and reliable PC security online!

I demand an official explanation by McAfee as soon as!

A very angry and displeased customer!!

The fix for the Memory leak was pushed through and released on the 1st February . Unfortunately a lot of users with McAfee suites bought through McAfee partners are still waiting. This is not under McAfee's control as this has been happening for as long as I have been around. some update as soon as they get the patch others do it when they test it and others at set times.

You can also disable the service via

It was fixed on 1st February? I am not sure if I had a different but similar problem as others here have stated. Google chrome kept crashing after 20-30 minutes of use. People who had the memory leak issue said that there PC was really slow (no mention of Browser crashing and not being able to open it again, so restart was needed).  There issue was that they would navigate to some folders that would take 10 minutes to get to, and the issue was due to the Analytics SDK. McAfee said to me that the reason why Chrome kept crashing was memory leak, and to do with AnalyticsSDK, but my pc was not slow.

I had this issue last week, after the 1st February  release for the memory leak fix. And I bought my McAfee Internet Security through McAfee, not other partners. The crash stopped as Analytics SDK was disabled last week my McAfee technician, however today Chrome crashed again and I saw in TaskManager AnalyticsSDK was enabled for some reason. I have no clue about this latest patch/update they released as I had problems (hopefully ok now).

I just checked my folders and I can confirm I have the McClientAnalytics.dll and McClientAnalytics.exe files. And my McAfee Internet Security version is 14.0 if that helps. CPU performance is at 0-2/3% (fluctuating) for the AnalyticsSDK atm, so hopefully Chrome wont crash otherwise I will have to just disable AnalyticsSDK again, as its currently enabled.

I would like to apologize for my moaning and complaining, I just feel a little angry with my experience in trying to get this fixed.